They say first impressions are the ones that last. And although it’s been more than a decade since Steve and Karen Guy initially toured University School of Milwaukee, they haven’t forgotten that visit. “I remember it like it was yesterday,” said Karen. “Going through the prekindergarten rooms and seeing how the kids were active and engaged in the learning. The classrooms were fluid environments. We could tell immediately that this school was going to be different.”

As their children, Stephanie ’20 and William ’23, have gotten older and more involved in the school, so have Steve and Karen. “We were involved in Phase 2 of the Next Generation capital campaign, which helped to complete the Lower School addition and renovate the Middle School,” said Steve, who is a managing director in Baird’s Global Industrial Investment Banking practice. “I also assisted with the strategic planning process and this is my fourth year as a Board of Trustees member.” 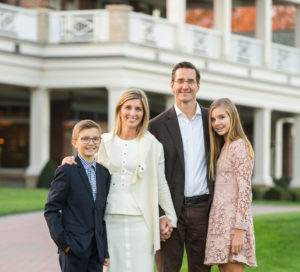 Students working in the Guy Family Collab during an Upper School English course.

Since her retirement from Artisan Partners in 2013, where she served as managing director and chief operating officer, Karen has had more time to devote to the school, including serving as the Parents’ Association treasurer. “I have a new appreciation for the rock star moms and dads who pour many precious hours into the school,” she said. “They have a million different talents that they share selflessly because they love USM and the impact it is having on their children. To me, it’s amazing, and I did not have a view of that when I was working full-time.” Added Steve, “As our kids have gotten older and we’ve gotten to know the school better, we have an even higher regard for it.”

In addition to volunteering their time, Steve and Karen’s gift to Our Common Bond funded the creation of the Guy Family Collab within the Lubar Center for Innovation and Exploration. The Collab is a flexible space that accommodates group learning. “As a result of our careers, Steve and I knew how to identify people skilled in problem solving, collaboration, creativity, and teamwork,” said Karen. “We could recognize—and hire—t eh people who had those traits and who would succeed. And as we became more familiar with USM’s curriculum, we could see those skills being taught to students starting as early as prekindergarten. To be able to gain those competencies at a sophisticated level, in high school and even earlier, is a lifetime gift to those students and we wanted to be part of that gift.”

Added Steve, “It is rewarding to know that, years from now, there will be something here that we helped establish. We have a good feeling about it. USM has been very good to our family and we are really happy to give back. The Lubar Center is such a unique space, and an opportunity for the school to differentiate itself and provide something that no one else is doing.”