Alex Palermo ’86 speaks five languages, but he may be most fluent in one that requires no words—food. For him, food has defined and informed his life since he was a small child. “Growing up with an Italian father and a German mother, it was not unusual for us to have two or three-hour dinners,” Palermo recalled. “Whenever my friends came over, they were amazed at how long our dinners lasted.”

As a senior at Pepperdine University, Palermo took inspiration from his mother’s cooking to launch the Divine Pasta Company, which sold homemade pastas to area restaurants. “I borrowed space from a restaurant that let me use its kitchen after closing to make the pasta. In exchange for the use of their space, I gave them fresh pasta.” 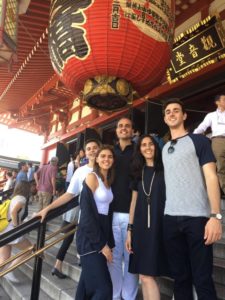 The company quickly grew, and Palermo has since acquired a variety of additional food manufacturing companies based in Los Angeles and Italy. All of the products, which include pizza, pasta, sauces, boxed dinners, and more, feature quality ingredients with no preservatives or artificial ingredients.

While his life and career have taken him far from Milwaukee, he hasn’t forgotten his University School of Milwaukee experience. When Palermo and his wife were looking for an independent school for their children, he searched for one in Los Angeles that replicated his USM education. “I wanted them to have the same quality education with Midwestern values that I had. It was really important to me.”

Palermo has supported the School’s Our Common Bond campaign with a gift to fund a new servery in which Upper School students will assemble their lunch before proceeding to the new Jack Olson ’67 Commons, where they will eat together. The servery will streamline the way in which food is served so that students can more efficiently access their meals, and dining staff members can quickly refill serving dishes. Other features, such as a larger salad bar and dedicated locations for hot entrees and sandwiches, will ensure that students have even more access to healthy and fresh options.

“I love that the school has continued the tradition of eating meals together, which is one of my favorite memories from USM. Being able to take a break from rigorous classes to refuel your mind and body with quality, nutritious food is so important, and I’m really proud to be able to support that.”

Eating family meals together is important to Palermo, and something he makes an effort to do despite his—and his family’s—busy schedules. In fact, he may have discovered the secret to keeping teenagers at home. “My wife is Italian and she cooks a lot, and we have family dinners almost every night, just like I had. We usually have a lot of kids at our house.”