Words to Live By

When he was a senior at Milwaukee University School, Robert Burch MUS’52 made a mistake, as young people often do. He smoked a cigarette on campus. Although many people at that time smoked, it was something his favorite teacher, Frank Spigener, abhorred, and warned students not to do. Spigener was MUS director from 1927 through 1954, and also a U.S. history teacher. As a result of his transgression, Burch lost his chance to earn the coveted Thompson Trophy, which went to the outstanding graduating senior who best represented the character of the school. At the awards assembly that year, Spigener told the graduating seniors, “There are six lines inscribed on this trophy:

“Not what you get, but what you give;
Not what you say, but how you live;
Give the world the love it needs,
Living a life of noble deeds;
Strong for the right – the good – the true –
These are the things worthwhile to you.”

This year, no one in the class has lived up to these words and no one will receive the trophy.” 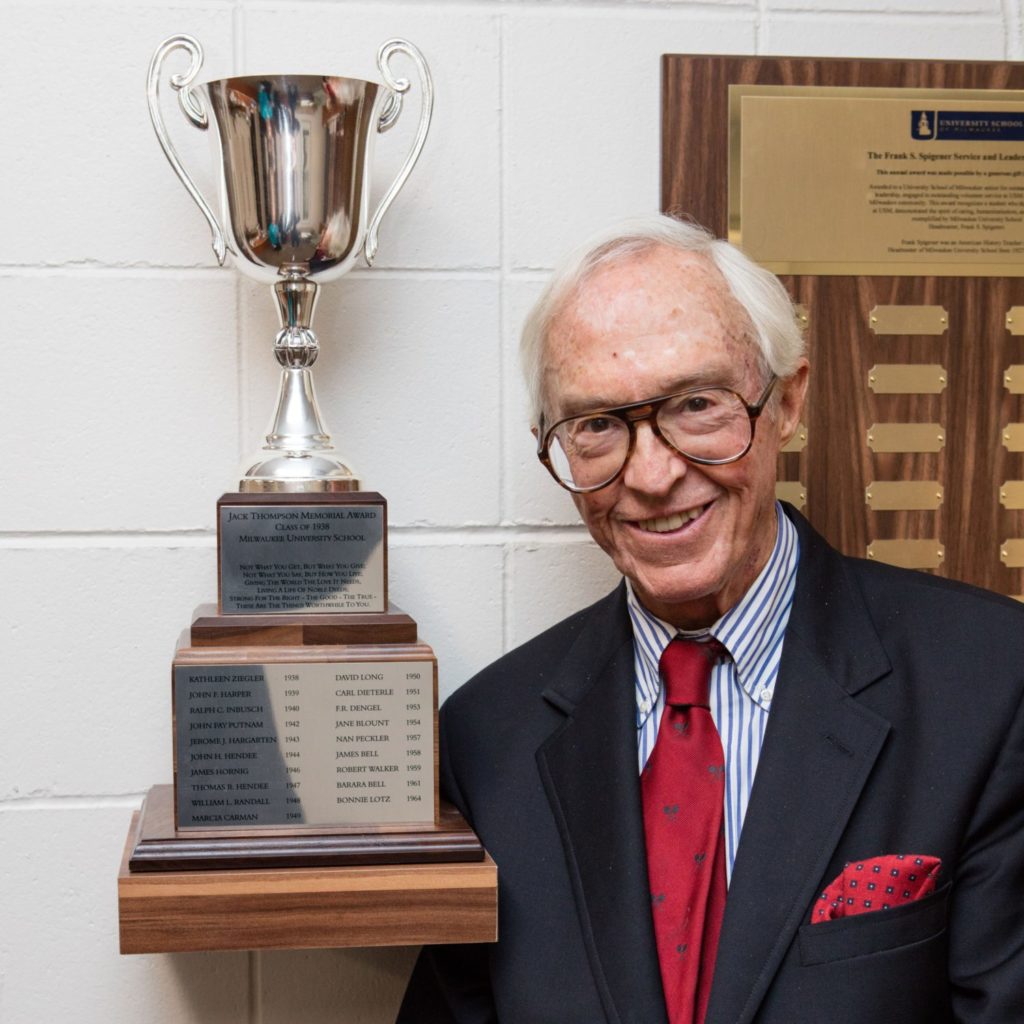 Burch went on to experience many successes in life, including graduating from Princeton University and later earning his MBA from Harvard University; serving as a general partner at A. W. Jones, the world’s first hedge fund; and giving back as a generous philanthropist with his wife, Dale. But he never forgot the words inscribed on the Thompson Trophy, which was awarded until USM’s predecessor schools merged in 1964. “Those words probably did more for me than anything,” he said. “They were character-setting values that resonated with me for many years, and they still resonate. And I thought it was important that the award, and those words, be brought back.”

Several years ago, Burch approached the school with the thought of making a contribution to USM on behalf of his MUS Class of 1952, and to honor his role model Spigener. Burch, through the Our Common Bond campaign, made a gift of $50,000 to establish an endowed fund for the Frank S. Spigener Service and Leadership Award in 2016. The award is given to a senior who demonstrates the spirit of caring, humanitarianism, and volunteerism exemplified by Spigener. Each year’s recipient will receive a cash award of $1,000 and the privilege to designate a grant of $2,000 to a local Milwaukee 501(c)(3) nonprofit organization of his or her choice.

In May 2018 Burch attended USM’s Upper School Honors Assembly, where he was named the 2018 Alumni Service Award recipient and talked about his life and the impetus for establishing the award. In addition, he bestowed the 2018 Frank S. Spigener Service and Leadership award to Mikaeel Kassam ’18.

It has been more than 60 years since Burch lost his chance to earn the Thompson Trophy, but he is certainly living up to the trophy’s inscription, and then some. Frank Spigener would be proud.